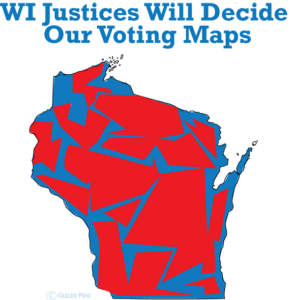 On April 7, voters will choose who will sit on the Wisconsin Supreme Court for generations.

This court will likely consider cases on gerrymandering, environmental protection, and women’s rights over the next decade.

We need to elect leaders like Judge Jill Karofsky, who will ensure we live in a state where the law matters, and who will break the cycle of courts beholden to the wishes of special-interest backers. – Jill for Justice

The Wisconsin Supreme Court is composed of seven justices who are elected to ten-year terms on a statewide basis. A complete roster of Justices may be found here. Terms are staggered; only one seat may be elected in any year. Any vacancies due to death, resignation, etc., are filled by the Governor on a temporary basis – the appointed justice may run in the next election cycle.

The next State Supreme Court election after 2020, barring any unexpected midterm vacancy, will be in 2023.

THE CHOICE IS CLEAR

Daniel Kelly, age 56, was appointed by Scott Walker in 2016 to fill the unexpired term of David Prosser. Prior to serving on the court, Kelly was in private practice; he represented the Republican Party in its legal defense of 2010 redistricting.

Challenger Jill Karofsky is a Dane County circuit court judge elected in 2017. Karofsky is a former prosecutor and executive director for the Wisconsin Office of Crime Victim Services and has earned the endorsements of myriad community leaders, officials, and organizations dedicated to equality.

The Democratic Party of Jefferson County urges you to vote Jill for Justice on April 7, the same date as the Democratic Presidential Primary!

What is your plan to vote?