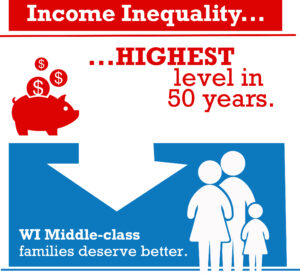 Like the nation, Wisconsin is “on an upward escalator of inequality” – with a widening gap between the very rich and everyone else. Most people in Wisconsin made less than $50,000 per year (2014), while the top one percent brought in over $1 million annually.

According to the 2017 Jobs and Economy Report by the Wisconsin Budget Project, a growing concentration of income is being held in the hands of the top 1%, while the incomes of everyone else stagnate, making it harder to make ends meet and achieve economic security.

“Unfortunately, while the wealthiest have seen their incomes skyrocket in recent decades, incomes have remained the same for the middle class and those who struggle to make ends meet. For Wisconsin families, it’s becoming harder to make it to the middle class and stay there.” –Wisconsin Budget Project, 2018

Lawmakers in Wisconsin have only made this problem worse by giving massive breaks to special interests while forcing cuts to things that benefit all of us, like education and clean air and water. As a result, low- and middle-income families in Wisconsin pay a bigger share of their incomes in state and local taxes on average than the wealthiest households.

Wisconsin’s tax system is also tilted in favor of corporations, particularly manufacturers. In 2011, lawmakers created the Manufacturing and Agriculture Credit, which cut manufacturers’ and some other corporations’ taxes by more than $1.4 billion since 2013, nearly eliminating their income tax liability altogether.

Instead of looking for new ways to cut taxes for corporations and people with the highest incomes, state lawmakers should turn their attention to making investments that help Wisconsin communities and families thrive.

As Democrats, we make it our business to be concerned with expanding pathways for the middle class. We believe that when the nation has too many regions of income inequality, social cohesion breaks down, young people lose hope, and the very health of our communities is degraded. We believe that public investments in rural areas and lower-income communities are necessary in order to reverse these trends. Places that have been left behind by the Great Recession deserve practical investments like broadband service, efficient transportation, networks of community colleges, and support for new businesses. The minimum wages need to increase as well.

These are our values. Join us to promote a stronger middle class in every county of our beautiful state.