Polling and Voting Trends in Wisconsin 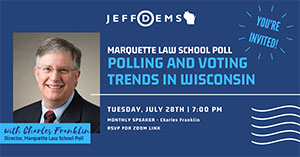 The Democratic Party of Jefferson County invites you to our next Monthly Speaker Series event with special guest, Charles Franklin – Professor and Director of the Marquette Law School Poll.

Biography:
Nationally recognized government scholar and pollster Charles Franklin has been director of the Marquette Law School Poll since its inception in 2012 and became a full-time member of the faculty in 2013.

Under Franklin’s direction as a visiting professor at Marquette, the poll became the largest independent polling project in state history. It accurately captured voter attitudes before every major election in 2012, including the gubernatorial recall, U.S. Senate and presidential races.

Since joining Marquette as a professor of law and public policy in August 2013, Franklin has used the poll to continue tracking political races of interest to voters and explore additional public policy issues.

Prior to joining the Marquette faculty, Franklin was a professor of political science at the University of Wisconsin-Madison beginning in 1992.

In 2005 Franklin co-founded Pollster.com, an award winning website for the analysis of polling data. The site received the Warren J. Mitofsky Innovators Award in 2006 from the American Association for Public Opinion Research, was featured in the New York Times Magazine’s Year in Ideas of 2007, was cited by data graphics author Edward Tufte for best visualization of the 2008 election and by Time magazine as one of the 50 Best Websites in 2008. In 2010 the Huffington Post acquired Pollster.

He is a past president of the Society for Political Methodology and an elected fellow of the society. Along with his co-author Liane Kosaki, Frankin received the Lasting Contribution Award of the Law and Courts Section of the American Political Science Association in 2009. He served for eight years as a member of the Board of Overseers of the National Election Study. In 2008 he was co-director of the Big Ten Poll which correctly estimated the presidential outcome in all eight states with Big Ten universities. His articles on partisanship, public opinion and the Supreme Court and U.S. Senate elections have appeared in a number of major journals and book chapters. He has been a member of the ABC News election night analysis team since 2002.

Franklin received his Ph.D. in Political Science from the University of Michigan.