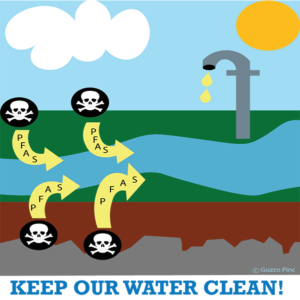 Gov. Tony Evers has signed a Republican-authored bill that imposes new restrictions on firefighting foam to curb pollution from PFAS chemicals. The bill prohibits the use of foam containing intentionally added PFAS except in emergency fire situations.

But Evers has stated the bill doesn’t go far enough and also should have placed restrictions on other substances that contain PFAS, such as food packaging and nonstick cookware.

Gov. Evers understands the health risks posed by the “forever chemicals” entering our groundwater. He is in favor of restricting PFAS and has created a DNR task force to recommend standards and remedies and has endorsed legislation calling for tougher limits on the chemicals.

Those bills failed in the GOP-controlled Legislature because industry doesn’t want it, and big-money lobbyists won. The bills they oppose would fund research, clean-up efforts, and create enforcement standards for these hazardous chemicals that do not break down in the environment or human body. (Wisconsin Examiner, Matt Rothschild – February 12, 2020)

PFAS have been found in more than 30 sites around Wisconsin, including in Marinette, where a facility produced and tested the foams for decades. People near the plant have to drink bottled water because their wells are contaminated.

Studies suggest that some PFAS compounds are associated with cancer, asthma, liver damage and thyroid disease.

“There are people back home in my district who I have no doubt are drinking poisoned water and are going to die young and they’re going to have all kinds of bad medical health issues,” said Sen. Dave Hansen (D-Green Bay).  Hansen implored Republicans to act with more urgency.

The bill’s sponsor, Sen. Rob Cowles, R-Green Bay, promised more legislation is on its way. When?

Five groups that oppose the bills have spent heavily on Republican candidates:

Another reason we need to reclaim the State Senate and Assembly in 2020!

Talk with your friends.