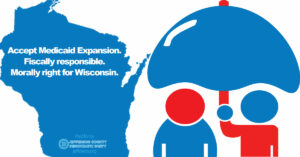 Medicaid Expansion has many components that make the topic complicated. Here are a few sources that explain the pros and cons for Wisconsin:

What is being done to pass Medicaid Expansion?

Democratic Volunteers Organize Across Wisconsin to #Fight4Medicaid
MADISON — Last week Democratic organizers and volunteers knocked on doors and made phone calls in targeted Senate and Assembly districts to pressure Republican legislators to expand Medicaid, a move that would extend affordable coverage to 82,000 Wisconsinites, save the state $324 million in the 2019-21 biennial budget, and free up $1.6 billion in federal funding. From June 8 – 15 volunteers reached out to thousands of voters to encourage them to contact their legislators. Volunteers contacted voters identified as Democratic-leaning, independent, and Republican-leaning.

Republicans on the Joint Finance Committee ripped Medicaid Expansion from Gov. Evers’ budget last month. An April poll from Marquette University Law School found that an astonishing 70% of Wisconsinites support expanding Medicaid. Republicans are set to bring their version of the budget to the Assembly and Senate floor next week.

First, learn more about the issue. Since you are reading this, you can check that off your list!

Second, follow us on Facebook (Democratic Party of Jefferson County (Wisconsin)) for updates on issues and ways to get involved.

Here are 2 ways to call: