May Members Meeting – May 26 – VIRTUAL 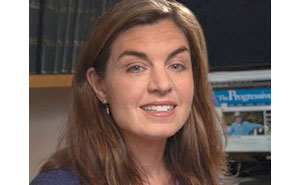 Our special guest is Ruth Conniff, Editor-in-chief of the Wisconsin Examiner. She formerly served as Editor-in-chief of The Progressive Magazine, and opened the Progressive’s office in Washington, DC, during the Clinton Administration, where she made her debut as a political pundit on CNN’s Capital Gang Sunday and Fox News. She moved to Oaxaca, Mexico, for a year in 2017, where she covered U.S./Mexico relations, the migrant caravan, and Mexico’s efforts to grapple with Donald Trump.

Conniff is a frequent guest on All In with Chris Hayes on MSNBC and has appeared on Good Morning America, Democracy Now!, Wisconsin Public Radio, and other radio and television programs.

In 2011, she did award-winning coverage of the uprising against Governor Scott Walker in Wisconsin. She has also written for The Nation, The New York Times, The Washington Post, and The Los Angeles Times, among other publications.

Conniff graduated from Yale University in 1990, where she ran track and edited the campus magazine The New Journal.