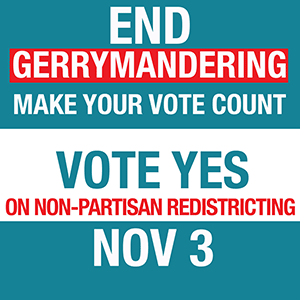 Jefferson County can join the 52 of Wisconsin’s 72 counties that have passed resolutions asking for the State Legislature to institute nonpartisan redistricting.

THE VOTERS WANT FAIR MAPS
According to a Marquette poll, 72% of Wisconsinites, and 62% of Republicans, said they want Fair Maps in 2021.

Voters should pick their representatives
Not the other way around

GERRYMANDERING IS DONE BY POLITICAL PARTIES TO MAINTAIN CONTROL
Every ten years, after the national census is complete, states must redraw voting maps to keep each district relatively equal in population. The majority party controls the process. In Wisconsin in 2011, the Republican controlled administration and legislature succeeded in creating the most gerrymandered maps in the nation — done in a few days, behind locked doors at a private law firm, employing the best computer mapping available. Experts have described it as perfectly crafted.

Wisconsin is truly a “purple” state – most statewide elections are won by only a few points by either party. But because of the way the districts are drawn, the Assembly is overwhelmingly dominated by Republicans.

Jefferson County was divided into FOUR assembly districts, breaking up our sense of community and diluting our votes.

Gerrymandering erodes democracy by discouraging challengers and making it safe for elected representatives to ignore the voters. They don’t need to listen to us as they will not be held accountable at election time.

Advocacy is growing for the Iowa Model, used successfully for 40 years, with no legal challenges by either party.

NONPARTISAN REDISTRICTING IS WITHIN REACH
The Legislature is being pressured to engage an independent commission to draw up voting maps using nonpartisan data. Gov. Evers has convened the Peoples Maps Commission

We don’t need a constitutional amendment, but passing one removes all doubt.