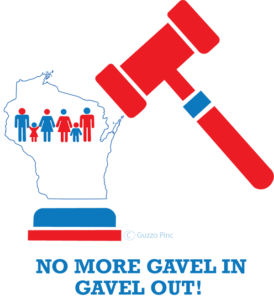 “Gavel in, gavel out” rallies the GOP

The Majority Party in the Wisconsin Legislature is working hard to avoid work. And when they do convene, Rep. Voss and Sen. Fitzgerald call to order, only to adjourn immediately with no action – gavel in, gavel out.

It held only 14 session days during 2019. Intentions are to hold only 20 session days this year. In 2019 only 21 laws were passed, well below the annual average of 300 in recent decades.

Why not bring bills to the floor for a vote? Why adjourn without an agenda? The strategy of obstruction is one way to avoid dealing with issues that people have time and again indicated they support, such as Red Flag laws and universal background checks for gun sales. Issues rangiong from fair maps to affordable health care to progressive farm bills are all going without hearings or votes.

The Republican-controlled legislature won’t allow bills to come to the floor in fear of going on record in opposition to the will of the people.

Assembly Minority Leader Gordon Hintz (D-Oshkosh) puts it this way, “There isn’t really a lot of interest in addressing and tackling the big issues out there.”

It’s not the low number of session days or bills that became laws that is so problematic; it’s that necessary work that Wisconsinites say is a priority has been left unaddressed.

In passing Act 9, the mandatory biennial state budget for 2019-21, Republicans removed 131 items from Evers’ proposed budget and has yet to bring these back for debate or action. Those items included:

Credit for this story, and for more – we thank and follow Melanie Conklin, Wisconsin Examiner.

Update: Some of the bills being ignored: