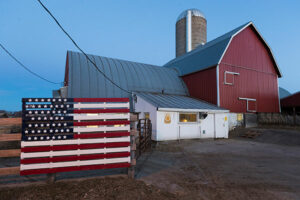 According to Barrett: A worldwide surplus of milk has driven down the price farmers receive to the point where many have lost money for months, or even several years, at a time. Nearly 3,000 U.S. dairy farms folded in 2018, about a 6.5% decline, according to U.S. Department of Agriculture figures. Wisconsin lost nearly 700 last year — almost two a day — as even dairy farmers used to enduring hard times called it quits in a downturn now headed into its fifth year.

More than 300 Wisconsin dairy farms shut down between January and May, including 90 — three a day — in April alone. In 2018, for the third straight year, Wisconsin led the nation in farm bankruptcies.

Some dairy farmers say they’ve been getting around $15 for every hundred pounds of milk they produce — roughly 12 gallons — but their costs are between $17 and $22.  Many families have exhausted their savings and credit to remain in business; a large number have at least one non-farm income to help meet the needs of their families.

And from WKOW.COM “Digging Deeper,” Sept. 20, 2019: Challenges leading WI farmers to close dairy operations. For more than a century, Wisconsin has been known as America’s Dairyland, home to more dairy farms than any other state. There are about 7,600 dairy farms with 1.28 million cows. The Wisconsin Department of Agriculture, Trade & Consumer Protection (DATCP) statistics show the industry contributes $45.6 billion to the state’s economy each year, boosting other industries, like manufacturing, veterinary care and construction.

Still, many farmers aren’t able to make ends meet right now, in a tough market. Wisconsin has seen an unusual number of farm losses, according to experts. State data shows 7,559 dairy herds in September 2019. That’s down from 13,037 in the same month ten years earlier.

UW-Madison Dairy Policy Analysis Director Mark Stephenson says Wisconsin is on pace to lose nine percent of farms every year, down from the usual rate of three to four percent. There has been price volatility for the past 20 years and very low milk prices for five, so the farmers haven’t been able to catch up.

Prices are just one factor making it harder to run a dairy business. The costs of technology and labor, plus aging farmers with no one to take over the operation have also led to the closures. Experts say operations have started getting bigger, producing more milk with fewer farms.