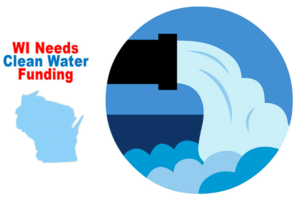 Gov. Tony Evers and Lt. Gov. Mandela Barnes are standing up for children despite GOP lawmakers removing $40 million from the state budget that would have begun replacing lead service lines. His executive order this July directs state agencies to create a position in the state Department of Health Services to work with other state agencies to address childhood exposure to lead.

After the disaster in Flint, MI, that brought international attention to the problems caused by lead in drinking water, you would hope our elected officials would rush prevent such costs (human and financial). The dire ramifications of lead exposure are well known. (Learn more here, from the EPA.

Consider these alarming facts (from Wisconsin Public Radio: Report Calls For State Action To ‘Get The Lead Out’ Of Drinking Water, April 10, 2019)

During his first State of the State speech in January, Evers dubbed 2019 the “Year of Clean Drinking Water.” That included naming someone within DHS to handle replacing lead pipes across the state and secure federal grants for the work. Evers’ clean water initiative included $32 million to improve water quality. That money will be used for a variety of programs, including the clean water fund, which provides financial assistance to municipalities for the planning, design and construction of wastewater treatment facilities and the state’s Safe Drinking Water Loan Program, which provides low-interest loans to municipalities for planning and constructing public drinking water systems.

But Republicans rejected the governor’s proposed $40 million in bonding that his administration said could have replaced about 9 percent of the roughly 170,000 lead service lines statewide.

Since then, Wisconsin lawmakers Sen. LaTonya Johnson, D-Milwaukee, and Rep. Kalan Haywood, D-Milwaukee, have circulated a bill to increase bonding for lead service line replacement. This bill increases the bonding authority for the Safe Waters program by $40 million and requires the state Department of Administration to allocate up to $40 million.

Republican lawmakers should support these and others measures to protect our children.