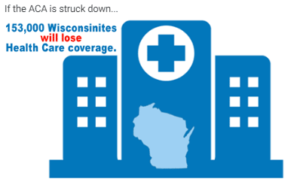 If the Affordable Care Act is struck down, 153,000 people will lose coverage, and people with pre-existing conditions won’t be protected by Wisconsin laws.

According to reports from Citizen Action of Wisconsin, Supreme Court action invalidating the ACA is a clear and present danger in 2020. Therefore, it is critical that state lawmakers put the law’s critical consumer protection into state law by the end of the legislative session.

If the ACA was struck down the following provisions would be eliminated from federal law:

We are urging lawmakers to create a plan, triggered by an adverse court decision striking down the ACA, to replace the marketplace plans for people who buy insurance on their own and the federal subsidies that make them more affordable.

The Affordable Care Act (ACA) has been a huge success… (But) Republicans have refused to defend the ACA. Make no mistake: the Trump-GOP lawsuit is a ticking time bomb. Health care-legal expert Timothy Jost said: “There seems to be a real possibility … that the Fifth Circuit may affirm the lower court’s judgment (ACA is unconstitutional). It will then again be up to the Supreme Court to sort things out. … (This) will likely become a major issue in the 2020 election.”

Call Rep. Horlacher, Rep. Dittrich, Sen. Nass and Sen. Fitzgerald and tell them you want the Legislature to protect affordable health care and the ACA. Contact information for local representatives.